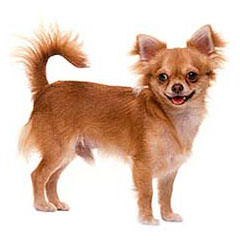 Once a sacred dog to the Toltecs and Aztecs, the Techichi is probably an ancestor to the Chihuahua, who comes from Mexico and is one of the most popular breeds there today. Legend says yellow Chihuahuas were buried with their masters to lead their souls into the afterlife—companions even in death. According to breed historians, the last Aztec ruler, Montezuma II, had hundreds of Chihuahuas. The Chihuahua first became popular in the United States in the late 19th century when Mexicans began to sell them to tourists. Today, the Chihuahua is the 11th most popular breed in the U.S.

Some Chihuahuas act a lot like terriers – feisty, full of fire, ready to chase anything that dares to run away, and always eager for the next fun game. Others have a shy streak and approach life a little more cautiously – everybody else is just so big. Some Chihuahuas can be outgoing and active with the people they trust, but a little more suspicious of new people and situations. Either way, Chihuahuas have sweet and charming personalities and little minds of their own. They recognize and particularly love to play with other Chihuahuas. They also like to be held, but they can gain self-confidence and courage if they walk on their own four paws – at least once in awhile.

Petite little dogs with dark, luminous eyes, short noses, square bodies, sickle-shaped tails, and dainty feet, Chihuahuas have domed skulls (sometimes called apple heads) which usually have a soft spot called a molera. Smooth-coated Chihuahuas have short shiny coats. The long coated variety has fringed ears and a plumed tail with feathering on legs and longer hair around the neck. Chihuahuas can be any solid, marked, or splashed color. Some Chihuahuas, like the famous Taco Bell Chihuahua, have longer noses and flatter heads. Sometimes called “deer Chihuahuas,” these dogs can make good pets but wouldn't be acceptable in a dog show.

Happy to do what you say as long as they can see how it benefits them, Chihuahuas have strong wills and don't like to do what they don't like to do. If trained gently but firmly and consistently, they can learn how to be well-mannered house pets and may even do a few tricks. Housetraining is more difficult because the Chi's tiny bladder needs to empty frequently, and pet owners often miss the cues. Plus, Chihuahuas often don't like to go out in the rain or step in the snow. Every time a Chihuahua has an accident in the wrong spot, he'll be less likely to go in the right spot next time. Consistently taking the dog out on a schedule or paper training inside with patience will eventually teach the resistant Chi.

Easy to groom, Chihuahuas need only weekly brushing, plus combing for the long-coated variety. Prone to tooth problems, Chihuahuas should have their teeth brushed daily. Keep nails trimmed and ears clean, and never leave a Chihuahua outside unattended. They can suffer from exposure to heat or cold, and could be stolen or injured. In winter, keep the Chihuahua warm with dog sweaters and body heat.

Like most toy dogs, Chihuahuas can suffer from luxating patellas (kneecaps that slip out of place), collapsing trachea , and hypoglycemia, especially as puppies. Chihuahuas are sensitive to anesthesia and prone to injury because of their size - watch where you step! Rarely, the Chihuahua develops hydrocephalus (water on the brain). Some Chihuahuas snore and snort because of their short noses, and most shiver a lot, but this is normal.

© Copyright 2014 LifeLearn Inc. Used and/or modified with permission under license.

View All
We share the same goal – ensuring your pet is healthy and happy! Pet Health Library