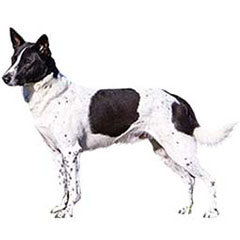 Canaan Dogs, once known as Kelev Kanani (Dog of Canaan), probably originated in ancient times, left behind to fend for themselves when the Romans made the Israelites leave their homeland 2000 years ago in the Sebulon Coastal Plain and Negev Desert. Over the centuries, Bedouins occasionally captured puppies to use as livestock guards, but the dogs were mostly feral. In the 1930s the Israeli Defense Force began to use service dogs in preparation for war, but they found the traditional European breeds couldn't withstand the heat. Dr. Rudolphina Menzel decided to capture the native feral dogs and train them. Not only did the dogs handle the heat well, but they excelled at their duties, serving during World War II as Red Cross dogs, mine detectors, messengers, and even locators of the wounded. After the war they served as guide dogs. The first Canaan Dog came to America in 1965, and the breed was recognized by the AKC in 1997. Most people who meet one don't realize they're meeting a breed with one of the most unusual histories in the dog world. Despite the fact that these dogs make excellent companions, the breed remains near the bottom of the popularity list, at 150thout of 155 breeds.

As befitting a dog that lived on its own, The Canaan Dog is aloof toward strangers, including strange dogs. Protective of family and a natural guardian, Canaan Dogs may bark a lot but are smart, devoted, and willing to please. Canaan Dogs are often used for herding, and they especially enjoy and excel at this task.

Like most pariah dogs, the Canaan Dog resembles the dingo. He's a medium-sized and square proportioned dog with head like an elongated wedge and ears erect and set low, with rounded tips. The topline is level with a slight arch over the loin, and the tail, set moderately high, may be carried over the back when the dog gets excited. The double coat consists of a short, straight, harsh outer coat and softer undercoat. Canaan Dogs may be any solid color, with or without white markings, or they may be predominantly white with patches of color.

Canaan Dogs are eager learners, so the best way to train them is to start early and give them lots to learn. They do well with clicker training but can become bored with too much repetition, so give them constant fun challenges. Early socialization helps them better accept strangers.

A dog living in the wild couldn't require much grooming - he wouldn't survive long if he did! The Canaan Dog needs only a weekly brush-down to keep him from shedding in the house too much, and to keep his coat in good condition. Brush teeth daily to keep them healthy, trim nails every week or two (or as needed), and the Canaan Dog is good to go. To stay healthy, however, Canaan Dogs need lots of mental and physical exercise, at least a long jog or strenuous run, plus a challenging training session every day. They are not content to just hang around, and can become frustrated if they don't have a job to do. If you don't give them work, in the form of learning tasks or exercise, they will make up their own ways to pass the time, and you may not like their choice of activity.

The Canaan Dog has no known major health concerns at present, but could potentially develop any problems that any other breed develops. Regular visits to the veterinarian will help keep your Canaan Dog healthy.

Jealou's Got Milk O'madriver, known to his friends as “Emmitt,” was the first Canaan Dog to win an AKC Best in Show.

© Copyright 2014 LifeLearn Inc. Used and/or modified with permission under license.

View All
We share the same goal – ensuring your pet is healthy and happy! Pet Health Library